November’s ride featured a mellow 20 miles or so up Cull Canyon and back.  The Bistro featured over 60 barrel-aged beers (as high as 13.2% ABV!)   We even picked up a new friend to ride up and down the hill with us. 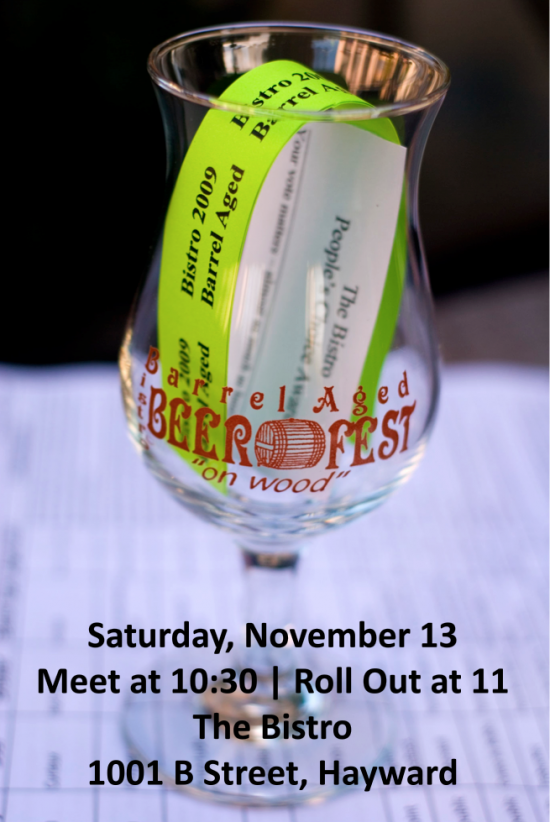 This month we’re back in the East Bay to visit The Bistro. “But the Bistro’s not a brewery” you’re saying? Well, you’re right – but we’re going to cut them some slack because they’ll be hosting the 5th annual West Coast Barrel Aged Beer Fest on Saturday. If you’re unfamiliar with barrel aged beers – you’re in for a treat. The gamut runs from hearty imperial stouts aged in bourbon barrels to mouth puckering lemonade-like beers aged in oak. Tickets run a bit steep. I don’t know what the pricing will be this year, but I don’t expect much of a change from last year: $40 for ten pours and a tasting glass, with additional pours costing $2. If that seems expensive – well it is. But keep in mind that these beers take a long time to produce and are often labor intensive. If you’re hesitant about diving in, the Bistro will have a few non-barrel aged beers to be purchased individually.

Since we’ll be doing some advanced beer drinking I’ve tried to strike a balance with an easier 19 mile ride up one of the Hayward hills. It’s a long and gradual climb with a great decent back to barrel aged goodness.

As usual I would encourage everyone to take public transit over to The Bistro. It’s located just three blocks from the Hayward BART station. It’s extra encouraged this month as many of the beers aged in old spirit barrels clock in above the 10% mark.

Looking forward to riding and drinking with ya’ll on Saturday!

P.S. Please note that the roll-out time’s been shifted back an hour to 11 instead of the usual noon o’clock. I don’t want us to miss out on choice selections because of a late start.