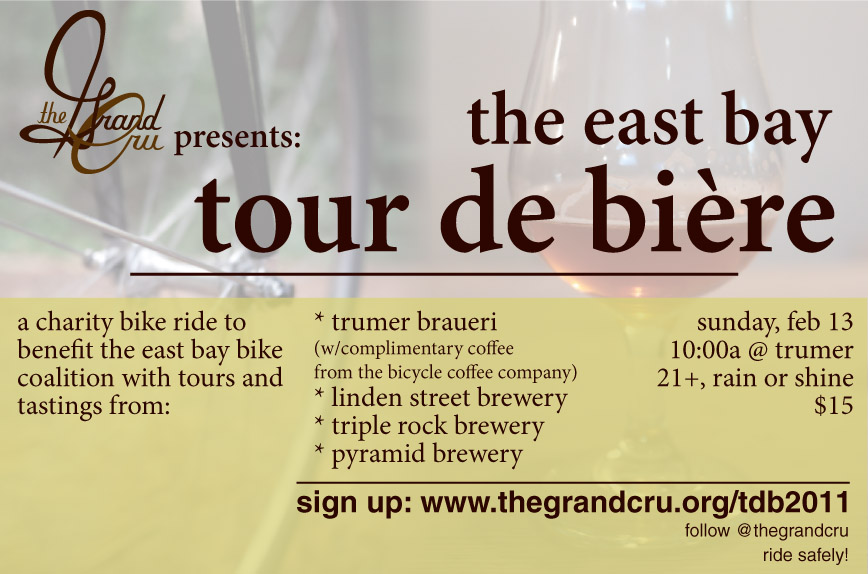 Update: Cue sheets and .gpx file for your phone/gps

Also, cue sheets for the ride are available here.

In honor of SF Beer Week The Grand Cru will be presenting Tour de Bière 2011 – a bike crawl through some of the best breweries in the Bay. We’ll be visiting four East Bay breweries and chatting with the craftsmen/women that are defining the East Bay brewing scene. While you drink great brews, you’ll also be helping raise funds for the East Bay Bike Coalition – an organization who’s working to promote bicycling as an everyday means of transportation and recreation in the East Bay. As part of your fifteen dollar ride fee, you’ll receive a wristband which will get you complimentary tastings and tours at participating breweries.

10:00a – Check-In at Trumer with complimentary coffee poured by Bicycle Coffee Co.

We highly encourage everyone to arrive via public transportation – our starting and end points are a 7 minute bike ride from the North Berkeley BART Station. We’re not looking to make a scene, so please bike safely and be friendly.

Tour de Bière has a hard cap of 50 riders, so get your tickets early before the ride fills up!

You must be 21 or older to attend this event. We will be riding rain or shine!